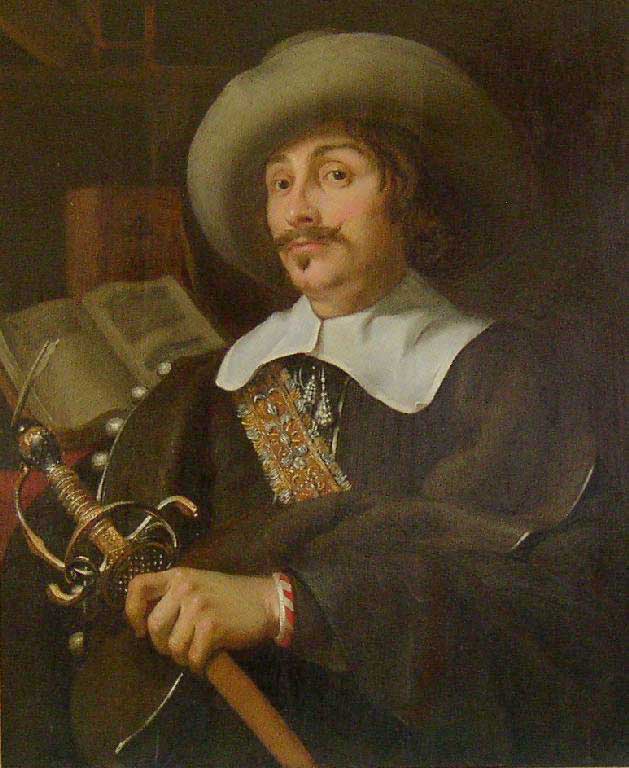 Gruffudd Nanney of Nannau 1611-1655 – A portrait of Gruffudd Nanney, half length, head to the right, wearing a brown cloak with embroidered cross belt, white collar and grey hat, clasping a sword with his left hand, an inkwell and open ledger together with another book displaying an unusual Masonic or Merchants mark, by his side, oil on oak panel, indistinctly inscribed / signed, dated 1644, 26.375 inches x 21.75 inches, contained in gilt gesso moulded frame.

Gruffudd Nanney of Nannau, esquire, 15th Lord of Nannau, was High Sheriff for Co. Merioneth 1640-1642. He married Anne, daughter and heiress of Lewis Gwyn of Dolaugwyn, Towyn, Co. Merioneth, esquire, by Jane the daughter of Hugh Nanney of Nannau. He was the grandfather of Colonel Hugh Nanney, and great grandfather of the Nanney Twins, Catherine and Janet. It was on Janet’s marriage to Robert Vaughan of Hengwrt, that Nannau passed from the Nanneys to the Vaughans.

The portrait of Gruffudd Nanney, although noted in the Nannau, Schedule of Contents 1958, only returned to Nannau during that year, on the death of Edith Nesta Mason O.B.E. (1880-1957), nee Vaughan, being part of her Trust, on her marriage to John Mason in 1914. The consequence of which, is that it was not seen by John Steegman on his visit to Nannau in the early 1950s, when compiling his survey of Portraits In Welsh Houses, published by The National Museum Of Wales in 1957, so has never been officially recorded.