DESCRIPTION: The Nannau Estate and Snowdonia National Park Authority recently created a new path up to the summit of Foel Offrwm which is around 1.5 miles, although this can be extended. It ends up at an Iron Age Hill Fort (one of two on this hill as there is also a lower one). The first half of the walk is reasonably flat, but this is followed by around 400 feet of ascent on some narrow paths. A couple of benches have been added which are placed to give spectacular views. The walk has views over Plas Nannau Hall, The Mawddach Estuary and the Snowdonia mountains to the North. Once you reach the summit, there are 360-degree views. This is the ‘official’ route to the top which replaces the old one I did which involved walking up a steep, uneven path beside a stone wall.

BUS SERVICES: Occasional Busses run from Dolgellau to Llanfachreth and back to Dolgellau (past the car park). These run via Brithdir and are part of the No.33 Route (Machynlleth – Aberangell – Dolgellau). They only run on certain days and are infrequent on those.

START: This walk starts at the Precipice Walk car park, officially called “Saith Groesffordd” (Seven Cross Roads), which is 2.3 miles up the main Dolgellau to Llanfachreth road. A nice point is that the crossroads come from earlier and more troubled times in Nannau history as it marks the seven roads (escape routes) which lead from the house.

At the time of writing, the car park is free and has toilets. While the car park can be full at peak times, only a few of those people will be walking this route. I have done it a few times and never seen another soul. There are very few markers along the route, which may account for this.

Starting from the car park, cross the road you just drove up (if you drove up from Dolgellau) and take the signed path opposite. Just after you cross the road you will see a path on your right that leads to a wooden gate, IGNORE THIS as this is the FOEL OFFRWM CIRCULAR WALK which goes around the base.

When the view starts to open up and you can see the Snowdonia mountains to the north, keep an eye open for a faint path that turns right up the grass hill (this is more of a worn area in the grass, than an actual path). You should be able to see a bench from the main path. Walk up to the bench (and sit on it, as you will be grateful for the rest later). After a rest, continue on and follow a faint narrow path which will eventually lead you to some fabulous views towards the Mawddach Estuary.

Follow this path past another bench and you will start to see another track which winds around left towards the summit. This is where it starts to get a little steeper and the route can get a little confusing. Keep going up and eventually you will reach the entrance to the old iron age hill fort.

Once at the top you are rewarded by a walk around the ruins of an Iron Age Hill Fort and a stone tower (of later construction). You also get some stunning panoramic views, including Dolgellau, Barmouth and a nice view of Plas Nannau Hall below.

A Detour or Two

If the summit is too much, or if you want to extend the walk, you can carry on past the second bench and you get some nicer views west. The path levels out here and makes a lovely walk on its own. Keep an eye out for a rocky outcrop as you can see some holes bored into the large boulders. These are ‘Rock Cannon’ which used to be filled with gunpowder and when lit, caused loud explosions which were used in many of the Coming of Age celebrations of the Vaughan family. 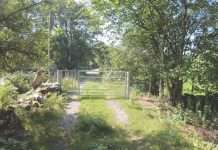 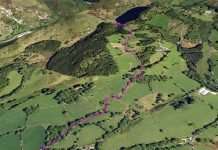 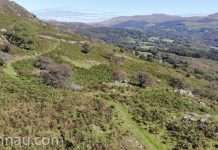 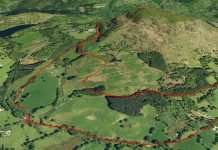 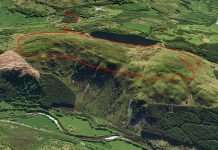