Such were the preparations for Robert Williames Vaughan’s ‘Coming of Age’ celebrations (his twenty-first birthday) on June 25th, 1824 a new kitchen wing had already been built. As well as that, an eighty-four feet by twenty-four feet straw-thatched ‘temporary room’ was built in the court. This contained four tables, each measuring thirty-two feet by three feet, plus two end-tables measuring fifteen-feet by three feet. One-hundred and ninety-three people sat down to dinner.

The meal included a Baron of Beef from the Great White Ox of Nannau (and the last of the herd), (weighing one-hundred and sixty-five pounds), four haunches of Venison, five Venison Pies, four Legs of Mutton and ten Hot Plum Puddings.

He married Francis Margaret in 1835, eldest daughter of Edward Lloyd, Esq. of Rhagatt,

Robert lived most of his life away from Nannau, due to a possible formidable mother (who only passed away they year before he died).

He lived mainly at Rûg and died in London aged 55 without an Heir. 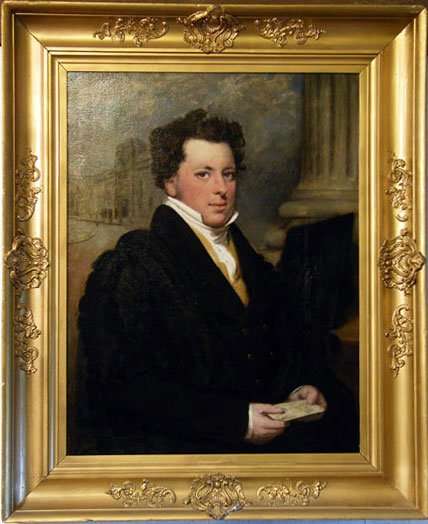 Sir Robert is holding a letter dated March 16th 1825 addressed to him at Balliol, Oxford. The college is shown to one side of the background with a classic column to the other. A companion painting in the National Library of Wales shows his father holding a letter bearing a Member of Parliament free stamp (see NMW03).