COMING OF AGE FESTIVITIES AT NANNAU

Last week demonstrations of a hearty and extensive character took place at Dolgelley, in honour of the attainment of the majority of Mr. Robert Vaughan, eldest son and heir of Mr. John Vaughan, of Nannau, a descendant of Sir Robert Vaughan, who was the member for Merionethshire for over 40 years, and whose picture, painted by Sir Martin Shee, R.A., is included in the picture gallery at the Dolgelley County Hall. Mr. John Vaughan fully maintains the reputation of the old baronet as a popular resident landlord, and, like his predecessor, is on the best of terms with the tenantry of a very large estate. He is chairman of the Dolgelley Union, the local president of the Merionethshire Agricultural Society, and evinces a very active and liberal interest in all local matters.

At the last election, he stood as the Unionist candidate for Merionethshire against Mr. T.E. Ellis, M.P., and was defeated. Nannau the ancestral mansion of the Vaughan family, has the repute of standing on the highest ground of any gentleman’s seat in Great Britain.

Mr. Vaughan attained his majority on Sunday, the 18th inst., and on Monday Dolgelley was en féte. A very influential committee had been formed at Dolgelley, and on Monday morning a large number of carriages proceeded to Nannau to present an illuminated address, which was framed in a massive and well-executed oak frame made by Mr, Owen Tudor, carver, Dolgelley. The text of the address was as follows:—

To Robert Vaughan, Esq. of Nannau.

It is the spontaneous desire of us, the inhabitants of the district in the midst of which the ancient residence of Nannau is situated, to offer to you our heartfelt congratulations on the 21st anniversary of your birthday. All classes, rich and poor alike — all parties, whatever differences of opinion may separate them on other questions, unite today in rejoicing that you should have attained an age which entitles you to take your position amongst us with the duties and privileges of manhood. No family is so well-known in the county as yours — none. more completely identified with it. Descended from the old Welsh Princes, the family of Vaughan possesses an historic interest in the Principality, and especially in the county of Merioneth — a county which is supposed to represent with unusual purity a Cymric branch of the Celtic race. Since the days of Howell Sele the territory of Nannau has continued in your family, and we can with pride at the present time refer to the traditions and point to the monuments which connect yourself with a history of this county extending over a period of nearly five hundred years. But it is not the past only which appeals to us, some of us now living who can remember Sir Robert Vaughan, of Nannau, who represented this county in Parliament for the long period of 44 years, but who otherwise never absented himself from his own home, and whose just and genial character, careful consideration for his tenants and dependents, and unbounded hospitality to all, are not likely, to be forgotten.

Passing on more immediately to the present period, we recognise the same qualities in your own parents. Your father, since he became into possession of Nannau, has resided there uninterruptedly; and, whilst doing all in his power to promote the comfort and welfare of his tenants, he has taken an active and useful part in the affairs of the county, and has never neglected an opportunity of being of service to the locality in which he resides. Thus will be transmitted to you an inheritance with a long and meritorious record, of which you may well be proud, and in which we as your friends and neighbours claim to be ourselves interested. It is that relationship to yourself which entitles us to present this address to you, and we venture to hope that you will prove worthy of such a record, and by following the examples of those who preceded you, cement the ties between yourself and those who may hereafter be dependent on you, and contribute always to the good-will and prosperity of all.

Mr. C.E.J. Owen, the chairman, presented the address in an able speech, in which he referred to the ancient family of Nannau, and to Sir Robert Vaughan, who is well remembered by many old inhabitants in the neighbourhood.

Mr. R. Vaughan returned thanks, and said that the friendship which had always existed between him and the inhabitants of the neighbourhood had that day been strongly cemented and that he lived in hopes that the same would never decrease, but on the contrary increase.

After the presentation, Mr. and Mrs. Vaughan invited the committee to a luncheon. The luncheon was magnificently laid. Amongst others of the committee present were the Hon. C.H. Wynn, Mr. O.S. Wynn, and Mr. H.J. Reveley. After luncheon, the Nanney family and the committee were photographed. The committee then proceeded to Dolgelley, and at Elwyngate there were some thousands of people waiting for Mr. R. Vaughan. In a short time, Mr. R. Vaughan and his father drove up, and the horses were taken out of the carriage, and scores helped to draw the conveyance.

The procession was formed, headed by the Dolgelley Brass Band, followed by two stuffed oxen (the flesh of which had been distributed to the poor by Mr. Vaughan), the members of the committee, Nannau carriages, Dolgelley friendly societies, and the public generally. When the procession came into Dolgelley it was seen that the town was splendidly decorated, several triumphal arches having been built. The church bells kept ringing throughout the afternoon. The procession went through the town and then returned to the Market Hall, which, although a large building, was crammed to excess, Mr. Reveley then presented Mr. R. Vaughan with a splendid and costly piece of plate, subscribed for by the inhabitants of Dolgelley. The Lord-Lieutenant of the County also spoke and dwelt highly upon the excellent qualities of the Vaughan family. Dr. Edward Jones also spoke in Welsh at great length, and after having traced the history of the family he clearly showed that they were descended from Welsh princes.

After the presentation, the procession was again formed and went to the Green, where athletic sports were gone through. The athletic sports were conducted in the orthodox fashion and were very successful. A large ring had been staked out and proper racing track marked. All the competitions were very keen. Sports conducted in this manner are very much appreciated by the public. The number of spectators on the Green was immense.

In the evening, after the sports, the committee had a dinner at the Golden Lion Hotel, at which Mr. John Vaughan and his son attended, at the invitation of the committee. The Hon. C.H. Wynn and others were also present. After the usual toasts were gone through, Mr. C.E.J. Owen, the chairman of the day’s proceedings, eloquently proposed the health of Mr. R. Vaughan, who very suitably responded. The proceedings wound up by Mr. John Vaughan heartily proposing the health of the committee, particularly mentioning Mr. Owen, the chairman, and Mr. C. Millard, the hon. secretary, who worked energetically and most actively in connection with the event, for the most successful way in which all the day’s proceedings had been carried out.

At 9:00 p.m. a grand display of fireworks was let off by Messrs. Follows and Sons, Stafford. The town was also beautifully illuminated, and the day will long be remembered by all who took part in the festivities. 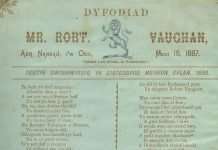 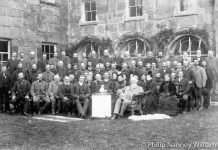 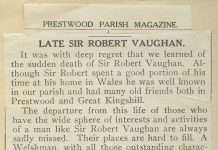 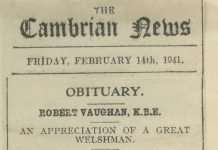