Nice to see this in the Cambrian News (cambrian-news.co.uk) this morning.

A few minor errors. It’s Jason Cawood (not Joseph) who owns it, unless another family member is the legal owner.

It probably wasn’t buit on the site of the 12th Century Mansion. That was around Hywel Sele Lodge in the Deer Park. 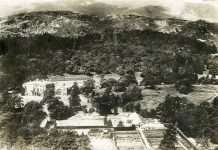