As part of the twenty-first birthday ‘coming of age’ celebrations of Robert Williames Vaughan, 3rd Bart., on June 25th, 1824, the sound of ‘rock canon’ reverberated around Nannau and Dolgellau.

At day-break, 21 rounds of guns were fired off from Cader Idris, which were returned from guns placed on eminence, near Nannau.

Rock cannon were created by drilling several deep holes in large rocks, they were then filled with black powder (gun powder) and ignited to cause a series of loud explosions.

There were cannon on Foel Cynwch and Foel Offrwm, the two hills that overlook Nannau. There were also other cannon around the area.

They were popular in the late eighteenth and early nineteenth-century. See the Wikipedia entry on Rock Cannon to learn more. 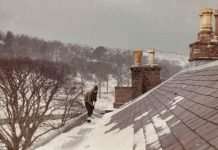