The curse of the Wyvern lay like a pestilence upon the people of Coed-y-Moch. The monster hunted human being and beast alike, destroyed every living creature which it caught.

Neither strength nor cunning availed against it, until there came one Meredydd, a youth renowned for his prowess. In a coat of steel, and armed with an axe that men said had fallen from Heaven, he set forth on his quest.

He found the Wyvern asleep beside a hedge of white hawthorn, drugged by the sweet scent. Meredydd gripped his axe and struck as he had never struck before – and the Wyvern’s head rolled at his feet.

This is a scan of an old cigarette card published in 1936 which tells the story of “The Wyvern of Coed-y-Moch”. While there is nothing in this story that mentions Nannau, it seems to be based on the old Welsh folk tale of “Gwiber Coed-y-Moch”.

I cannot find any English version of this tale, but I have attached a copy of the Welsh version (below) which was kindly sent to me via Facebook (details here).

…It has also scared generations of local schoolchildren! 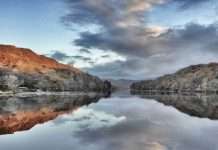 The Fairies of Llyn Cynwch