The following is taken from “The Story of Two Parishes: Dolgelley and Llanelltyd” written by T.P. Ellis and published in 1928:

The most famous of all were the fairies of Llyn Cynwch, and the beauty of the place is so entrancing that no wonder fairies loved the little dell. At the bottom of the lake is a marble palace, which only one human being has ever been privileged to see.

He was a servant of Nannau, in love with the dairy-maid at the farm of Dol-y-clochydd,-isn’t that a beautiful name, the Meadow of the Bellringer? – and one dark night, when going to see his lady-love, he fell into the lake, saw all its wondrous glories, and was eventually led by no less a person than the King of the Fairies along a marble passage, at the end of which was a slate slab, which, when lifted, turned out to be the hearth stone of Dol-y-clochydd, by the side of which the lost lover discovered the dairy-maid weeping over him, for he had been absent for months.

The story was also published in “Welsh Outlook”, printed in October of the following year, which contained more detail:

He found himself in the fairest garden he had ever beheld. All the flowers he knew, and a lot of flowers he didn’t know, were blooming together, spring, summer, and autumn flowers, all at the same time. Journeying through the flowers, he alighted on a marble palace, shining white and picked out with the rarest of gems and glittering with gold and with silver.

The King pushed the stone aside, and, stepping upwards, the lover found himself in the kitchen of the farm, side by side with the maid he had set out to see, and who was weeping because he had not arrived. 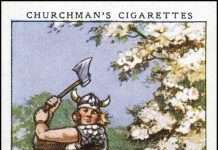 The Gwiber/Wyvern of Coed y Moch