Coed y Moch Lodge (aka Garthbledden Lodge or Clock Lodge) was built by “Yr Hen Syr Robert” between 1794 and 1818 (as a lodge is shown on an 1818 estate map, but not on one dated 1794). The lodge was the main (southern) entrance to the original driveway which ran just under a mile to Nannau.

Coed y Moch is Welsh for “Wood of the Pigs”, as it was probably where the estate pigs would be let out to forage in the natural oak woodland. The lodge and wall are Grade II listed. 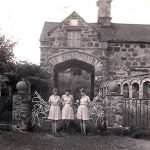 The Lodge in 1966. The three girls are standing in front of the gates that were given to Brigadier Charles Hilary Pritchard Vaughan by his old regiment

The gates contain the Pegasus Badge emblem of the Airborne Forces and were made by his Parachute Brigade Engineers. The gates were probably here from the 1950s to the early 1970s. 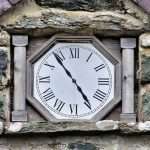 The original hands of the clock were set to six minutes to five, indicating that a traveller was always in time for a meal. The clock is no longer there, being replaced with a painted one set to the same time.

ABOUT US
If you have any photographs or information about Nannau, or other lodges/buildings on the estate etc., I would love to hear from you.
Contact us: dolgellau@btinternet.com
© Copyright 2020 MSS Studios. Designed by Ian King, MSS Studios, Dolgellau.

I would like to thank the following people for their help and contributions to this website (and my previous one at nannau.com): Dennis Yancey (and his Nanney Family Archives), David Brown, Philip Nanney Williams, Christopher Quaile, Miles Wynn Cato (welshart.co.uk), Welsh Antiques (welshantiques.com), The National Library of Wales, The National Museum of Wales and The Royal Commission on the Ancient and Historical Monuments of Wales.
This website uses cookies to improve your experience. We'll assume you're ok with this, but you can opt-out if you wish.Accept Read More
Privacy & Cookies Policy
Necessary Always Enabled