This is the Complete Transcript from the Schedule Of Content.
Original Scans Courtesy of Philip Nanney Williams.. 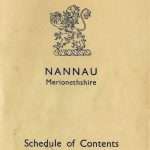 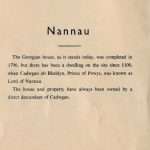 3. Probably Anne, daughter of above, sister of No.7. and widow of William Vaughan of Corsygedol. (No.78). 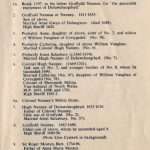 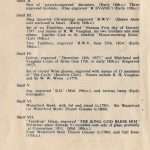 16. Probably Catherine Vaughan, 1721-1807 (eldest sister of Robert Howell Vaughan, 1st Bart.) Not a pair with No.15, as formerly supposed. Painted by a later and inferior artist. Note likeness to 2nd Bart (No.24) who would be her nephew if this conjecture is correct.

18. Thought to be Howell Vaughan of Hengwrt (as above). 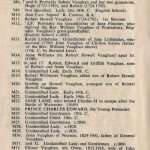 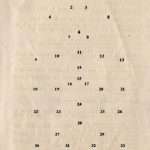 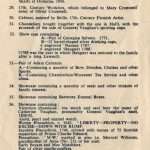 26. Carpet, made by blind Indian orphans to the order and special measurements of Major (afterwards Maj. General John Vaughan, when serving with his Regiment in India (c.1908).

28. Chinese Chippendale table, bought with two others by Brigadier Vaughan at the sale of furniture belonging to the late Sir Eric Skaife at Dolserau, 1956.

31. Chandeliers bought (together with the one in Hall), with the proceeds of the sale of General Vaughan’s sporting cups.

33. A Pair of Adam Cabinets.
A – Containing a quantity of Bow, Dresden, Chelsea and other figures.
B – Containing Chamberlain-Worcester Tea Service and other china.

34. Showcase containing a quantity of seals and other trinkets of family interest. 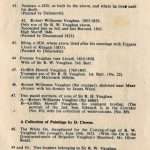 46. Robert Williames Vaughan (the younger), sketched near Maesybryner with his donkey, by James Ward.

47. Two pastel portraits, of sons of Sir R.H. Vaughan.
A.- Robert Williames Vaughan (the elder).
B.- Griffith Howell Vaughan, his youngest brother. The portrait of the 2nd Son, Edward is in the Corridor (No.85), with his collection of watercolours (No.89).
A Collection of Paintings by D. Clowes

48. The White Ox. slaughtered for the Coming-of-age of R.W. Vaughan (the younger). June 24th 1825. (With the Ox is the great-great-uncle of Brigadier Vaughan’s Shepherd, Mr. Oliver Rees.

52. Hound, belonging to Sir R.W. Vaughan, hunting a fox on wooded hills near Hengwrt (Precipice Walk in the background). 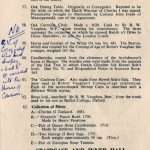 53. Hunter and dogs. Llangollen Bridge and Castell Dinas Bran in background. By Weaver.

56. A quantity of silhouettes. Sir R.W. Vaughan and other members of the family.

57. Oak Dining Table. Originally at Corsygedol. Reputed to be the table on which the Death Warrant of Charles I was signed. Presumably brought to Merioneth by Colonel John Jones of Maesygarnedd, one of the signatories.

58. [MORE] Oak Carrying Chair. Made c.1620. Used by Sir R.W. Vaughan. M.P. when touring his constituency. The dates represent the occasion on which he crossed Bwlch o’r Drws to Dinas Mawddwy, to join the London Coach.
ERROR ON THIS ENTRY – NO – R.V. of Corsygedol who had dropsy, had to be carried into the House of Commons

59. Horns and forefeet of the White Ox (see No.48), The Barron, which was roasted for the Coming-of-age of Robert Vaughan the younger, weighed 165lbs.

60. Candlesticks, copied from the chimneys of the Archdeacon’s house at Bangor. The wooden ones were made from the remains of the Oak in which Owain Glyndwr hid Howel Sele’s body. (See No.70, and Biographical notes in Souvenir Booklet).

61. The ‘Ceubren Cups.’ Also made from Howel Sele’s Oak. They were used at Robert Vaughan’s Coming-of-age celebrations. Each of the acorn-shaped Stirrup Cups is inscribed with a different Welsh saying.

71. A coloured print of the oak, from a drawing by John Parry. 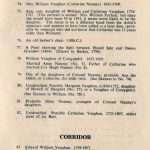 75. Ann, only daughter of William and Catherine Vaughan. 1734-1767. (This portrait is named ‘Mrs. William Fychan.’ but since she would have been 59 in 1951, it seems more likely to be the daughter. The name is by a different hand from the Artist’s signature, and appears to have been added at a later date (probably by someone who did not know that Catherine was 15 years older than William).

79. One of the daughters of Colonel Nanney, probably Ann the eldest, or Catherine, the elder twin. (See likeness to No.74). 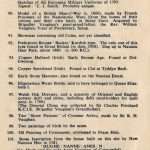 88. Knife, fork and spoon used by Colonel Vaughan-Salusbury, during the Peninsular War.

90. Model of a British Man-o’-War (c.1800), made by French Prisoners of the Napoleonic Wars (from the bones of their rations and their own hair), in Salop Gaol. Acquired by Brigadier Vaughan’s great-grand-fafther, the Rev. William Vaughan. Vicar of Pontesbury, Salop.

96. Elizabethan Water Bottle, said to have belonged to Queen Elizabeth I.

99. Two paintings of birds by the same.

101. Stone Inscription from the house built on this site by Huw Nannau Hen in 1581.
‘HUGHE:NANNE:ANES:N:’ (i.e. Hugh and his wife Anne Vaughan of Corsygedol).

102. Victorian Firescreen, showing ‘Old Nannau.’ from a sketch by Moses Griffth (in the National Library of Wales). Also ‘Old Rhug,’ and two of the bridges on the Estate built by Sir R.W. Vaughan, 2nd Bart. 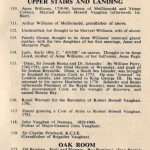 109. Paintings of Pugs, belonging to Owen Slaney Wynne, who lived for many years at Doluwcheoghryd. (Painted by is wife c.1890).

111. Arthur Williams of Meillionydd, grandfather of above.

112. Unidentified, but thought to be Merryel Williams, wife of above.

113. Family Group, thought to be Anne Williams’ maternal grand-mother, with the two daughters of her first marriage, Anne and Margaret Pugh.

115. ‘Omai, Sir Joseph Banks and Dr. Solander.’ By William Parry, 1742-1791, son of the blind Harpist of Wynnstay, and pupil of Sir Joshua Reynolds. Omai, a South Sea Islander, was brought to England by Captain Cook in 1773. He was ‘lionised’ by London society, and introduced to King George III. He was returned to his native Huaheine in 1776. Solander and Banks (afterwards President of the Royal Society), were the botanists who accompanied Cook on his voyages of discovery, and named Botany Bay.

116. Royal Warrant for the Baronetcy of Robert Howell Vaughan. 1791. 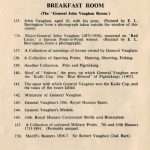 135. John Vaughan, aged 10, with his pony. (Painted by E.L. Barrington from a photograph taken outside the window of this room).

137. A Collection of paintings of horses owned by General Vaughan.

139. Another Collection. Polo and Pigsticking.

141. [The spear with which General Vaughan won the Kadir Cup, and the tusks of the boars killed.

Most of the original period furniture and effects were sold off at auction, by direction of Brigadier C.H.V. Vaughan, D.S.O., D.L, J.P.

Following the disposal of the mansion with a few acres of surrounding land, and the Owner’s intention to reside in a smaller home nearer Dolgellau, the major portion of the contents is being sold by auction on the instructions of Brigadier C.H.V. Vaughan, D.S.O., D.L, J.P.

It is interesting to note that Nannau, a Georgian house standing 700ft. above Dolgellau amid some of the most delightful scenery in Britain, is probably the fifth on the site, built 1788-96. The first known house was erected in 1100 by Cadwgan ap Bleddyn, Prince of Powys from whom the Nannau (or Nanney) and Vaughan family, descend.

And so there has been a member of this old Welsh family at Nannau for well over 800 years, thus creating a wealth of principality and family history, instructive, interesting and varied. It naturally follows that the mansion itself with its many antiquities, armorial stones, royal arms and family portraits (not to be sold) will attract considerable attention.

This website uses cookies to improve your experience while you navigate through the website. Out of these, the cookies that are categorized as necessary are stored on your browser as they are essential for the working of basic functionalities of the website. We also use third-party cookies that help us analyze and understand how you use this website. These cookies will be stored in your browser only with your consent. You also have the option to opt-out of these cookies. But opting out of some of these cookies may affect your browsing experience.
Necessary Always Enabled

Any cookies that may not be particularly necessary for the website to function and is used specifically to collect user personal data via analytics, ads, other embedded contents are termed as non-necessary cookies. It is mandatory to procure user consent prior to running these cookies on your website.